Can Data Be As Lovable As Mickey Mouse by Salim Khubchandani, On-Target Marketing Solutions Sdn Bhd

Let’s rewind to the early part of the 20th century and most would think that there can be little to be loved about a mouse, often considered as being creepy. But yet Walt Disney with his imagination and then emerging technologies (like animation) made it one of the most lovable characters, that Mickey Mouse is even today.

Back to the present moment and context, with ‘big data’, the large volumes of data can run into massive spreadsheets and appear boring or overwhelming to process, thus being a bane of marketers or businesses in some quarters. The same data when presented visually and with a story is ingested within no time, almost reminding of how many of us were told stories or watched TV while we were made to have our meals as little kids. And this is where data visualization (and the tools that iad) plays a pivotal role as a part of the data science and analytics ecosystem or discipline.

The term ‘storytelling with data’ has been appropriately coined as it makes the massive volumes of data ‘palatable’ unlike if its raw form, and more importantly aids in decision making, with the key insights visible even at a quick glance. We take us one example relevant for us as marketers, the data represented through the visual above which at a quick glance brilliantly reflects the ‘Most Valuable Brands by Country for the year 2017’. This infographic brilliantly conveys and is a culmination of extensive research done by Brand Finance (a leading global independent, brand valuation and strategic consultancy) annually to measure the strength and value of the nation brands of 100 leading countries, based on several parameters, which would have resulted in several spreadsheets of data. 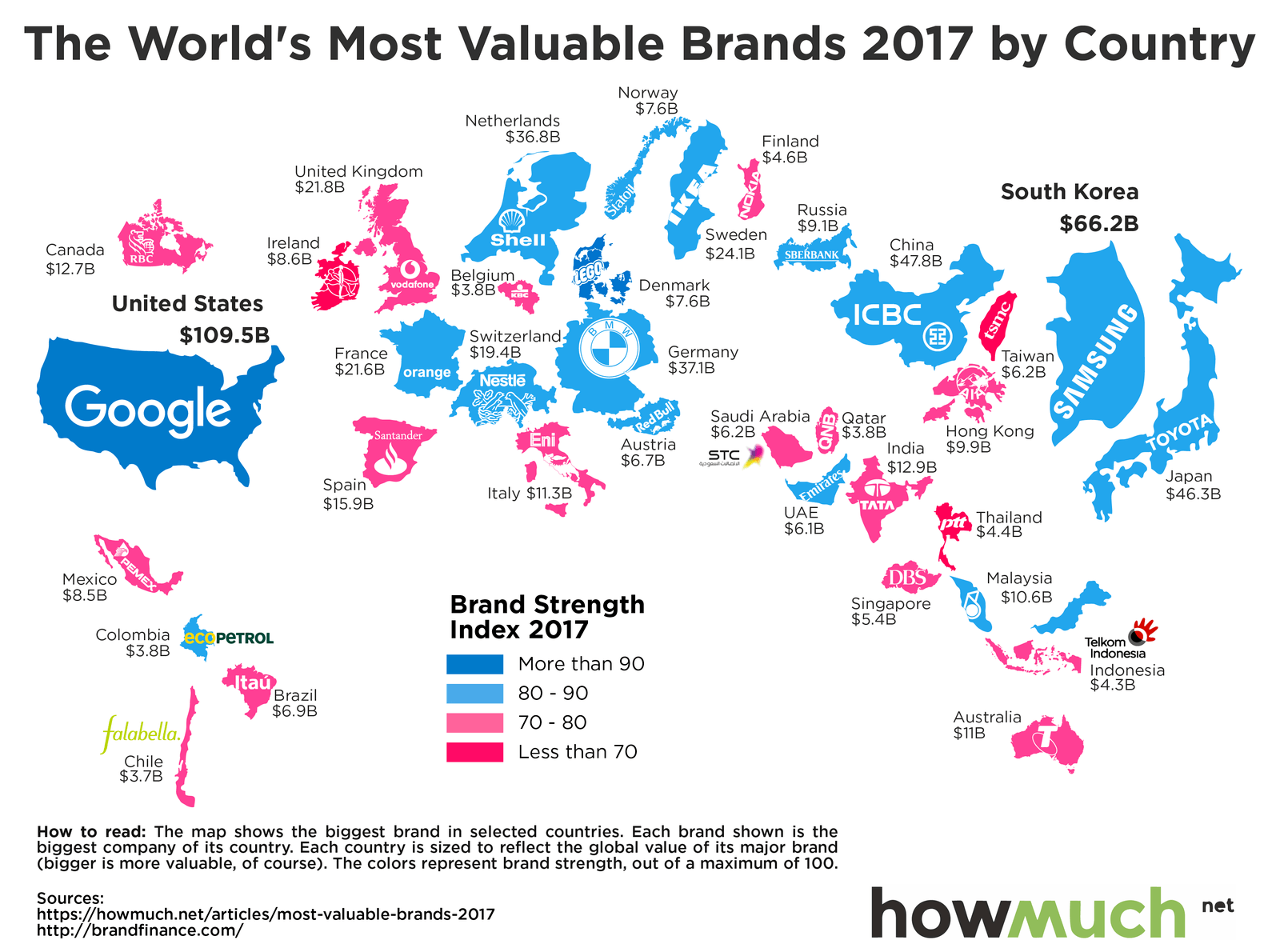 Data analysts today have several tools at hand for data visualization. Storytelling with data visualization however is not an inherent skill and the tools don’t necessarily make it much easier. In her book “Storytelling with Data”, the author Cole Nussbaumer Knafflic demonstrate how to create an engaging, informative and compelling story with data.

Some key points to bear in mind while creating visualization with data are:

Have a story, which ultimately brings data to life. This story also must be supported with captions so as to not leave the audience guessing. Sometimes, even the best data visualisation may fall flat without a great story.

Bring in a Plot, Twists and Ending in the story, just as we’ve seen in our favorite storybooks and movies. The ‘Plot’ in the case of the data refers to the context that is essential to the audience or what they need to know from the data. ‘Twists’ refer to aspects that are fascinating or interesting about the data, with ‘Ending’ referring to the call to action or a pay-off that we want our audience to take based on the data.

Leverage on iconic memory of the brain which is tuned to ‘pre-attentive attributes’ or those attributes like colour, shapes or anything that is striking. Attributes like colour also have been found to impact the tone of the visual story and can thus affect emotions and here cultural implications too need to be taken into account vis-a-vis certain colours in some markets. Even subtle aspects like colour blindness (which as been researched and found to affect 8% of men) come into play here.

Have an overarching story in the event the data is throwing up several interesting outputs. These key pointers help us to appreciate some of the better data visuals over others. If we pause for a moment, we’re all ‘Data Storytellers’ as we’ve at some point of time even plotted simple graphs to convey a point and in the process brought data to life. Bearing the above in mind makes us better storytellers with data. The sophisticated Data Visualisation tools such as Tableau, Qlik, Power BI among others come handy with ‘big data’ sets. Also several Infographic tools like Easel.ly, Visme or even many of the mindmapping tools out there enable bringing ideas to represent data to life. The essence however lies in having a plot, with the right twists and the ending.

On the one hand storytelling and visualisation have been established and known to work and around for decades or more than a century. In today’s business context and the digital landscape, with ‘big data’ where there’s so much more to be extracted from and analysed to get to the core insights, and the visualisation techniques at disposal, it’s for the analysts to bring the data to life and fuel the passion for insights among Marketers, just as Walt Disney did with the mouse.

Subscribe to our newsletter to receive updates on DataViz My research, tips, resources, events, news and more.

With data, keep your eyes on the stars, and feet on ground by Salim Khubchandani, On-Target Marketing Solutions Sdn Bhd

“…Is money being invested in data science purely because it’s become the buzz word, with no attention being paid to more fundamental aspects like having the frontline staff aligned with the organisation’s goals” Last week, Read more…

Recently I started a new project to build QA system for Mindvalley. After a short discussion with my colleagues we decided to use the 2011 jeopardy winner (Watson). As you may know Watson is a Read more…

A Basic Recipe for Machine Learning by Hafidz Zulkifli

Ever since wrapping up the three Deep Learning courses by Andrew Ng I’ve been meaning to write down some of the gems that he’s highlighted throughout the course. One of the nice ones that I Read more…